What is a Vritti (Thoughts)? What To Do With Them? 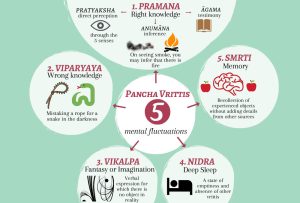 Vritti or thought is the nature of the mind (antahkarana).

Thoughts arise just as a bubble (which is always an effect of something deeper in the ocean) arises on the surface of the ocean.

More important, what is the purpose or function of a vritti?

It’s to remove ignorance of gross-objects in the transactional world (vyavaharika).

Put another way; objects in the world are essential undefined matter.

As a baby, the perception of world is almost 2D, because baby’s vrittis aren’t educated, hence unable to give distinctness and meaning to matter-objects.

Instead of “butterfly, tortoise, cloud, hot, cold”, it’s all put into one category; a wonder. That’s why we’re in awe of the world in early years. It’s actually our ignorance of objects.

As our mommy and daddy start pointing to things and saying “butterfly“, “cloud“, does the vritti gain capacity of individuation.

It’s all a “Wow” until one gains knowledge or gets educated into the nature of that thing.

As the mind gets educated, the vritti is able to remove a lot more gross-object-ignorance then in the early days.

Again, the toddler encounters a rainbow for the first time.

From thereon, the toddlers rainbow ignorance has been removed owing to rainbow-vrtti, and will continue to be removed whenever the mind assumes the form of a rainbow.

Therefore the vrtti is removing ignorance of objects every moment.

Imagine seeing a car once, then becoming instantly unfamiliar with it again. We couldn’t function like that.

Soon as ignorance is removed, that object shines in front of you as THAT-DICTINCT object, which you can then work with rationally.

In other words, thanks to “tennis-ball-vrtti”, you have no doubts it’s a “tennis-ball” and not a “green-apple”.

How do we use this knowledge ito benefit our life?

If vrittis are tamed (disciplined), then unncessary desires and distrubing thoughts will subside.

The 5 types of vṛttis which we do have control for sake of improving our life, are:

When the mind assumes shape of an object (or modifies itself into the form of the though), this is Vishayakara-Vritti.

Classic Vedanta example is Ghatapatadi-Vritti (mind undergoing a modification of a “pot” object).

When thought (whose knowledge is accurate in reference to reality) of Infinity or Brahman arises, a Brahmakara-Vritti is formed.

The aspirants task is to be alert for Vishayakara-Vritti, and immedaitely convert it to Brahmakara-Vritti.

For example, “This though is a changing phenomena, appearing in time; a product of maya whose content is Existence-Awareness [Brahman], which is myself”.

This is the process behind the principle of Self-enquiry.

Remember the word “conversion” whenever in doubt what self-inquiry involves.

It certainly needs a diciplined and vigilant mind, as most will revert to old habits; interpretting each situation with the old narratives.

So self-inquiry is definately not for majority personalities because the minds are too passionate (rajasic). Hence they’re better prescribed various Yoga systems; most popular being 8 Steps Asthanga-Yoga.

Important point is, this conversion needs to be deliberately practiced long enough, until it’s auto-pilot.

You have to start changing thinking from…

…objects having their individual existence, into…

…recognizing that each object is mithya (resolves into something smaller, ultimately Existence-Awareness [Brahman]). Just as all pottenware resolve into the One same clay.

Another way put; once Vishayakara-Vritti takes place, immediately follow-up with the second step — recognizing that the vritti (in form of the perceived object), depends on Brahman (whose nature is Existence-Awareness).

From this, we conclude that the only reason objects bind you (eliciting concern, anxiety, lack of contentment) is because you fail to consciously, mindfully and forcefully introduce the second step as mentioned above.

Of course, one’s mind first needs to be educated into the actual nature of objects, before one can perform a conversation process that over time, brings about a permanent identity-shift. Education can be found in CH13, 14, 15 of Bhagavad Gita.

On bases of observation and classification, five kinds of vrittis are observed:

Again, practitioners taks is to progress upwards from 1 to 5.

When extroverted tendencies of mind are arrested and all (or majority) it’s attention is spontaneously turning within, this condition is called; Antarmukha-Vritti.

If this kind of thought dominates the antahkarana, it’s equivalent to being Sattva-guna dominant (enjoying a clear, clean and cheerful state of mind).

Whereas Bahirmukha-Vritti is opposite. It’s the outgoing tendence of the mind due to excess Raja-guna. It’s busy projecting. It’s highly alert about objects “out there”. It’s a highly desirious or passionate mind.

Bahirmukha-Vritti are minimized by process of Conversion, as stated earlier.

One has to contantly inquire into nature of objects, until the “enticing power” of objects subsides.

Just as children toys no longer entice us as adults.

And Antarmukha-Vritti is what jumpstarts the progression from 1 to 5 as mentioned above.

It’s not that the body gets tired, as much as the mind gets exausted or fatiguted due to unneccessary and impulsive thoughts. A fatigued mind reflects in the body as fatigue (low energy, unmotivated).

Each impulsive, unproductive or unneccessary thought is unit-of-fatigue.

You may remember a time when you felt cheerful in your life. Tiredness seemed to vaporize.

In same manner, one should take seriously the endavour of vritti conversion — taking a moment to inquire the nature of the object, rather then judging it or putting it inside a mental box.

Benefit of the conversion is inner strengh, silence, and you become a comfortable person to be around yourself.

They’re not meant to be read passively. Every word is meant to point out something about your experiences; allowing you to be more mindful. Therefore, take a moment to consider where each word applies in your experience. 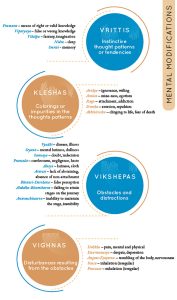 What are the Bandhas?

Original Purpose of Vegetarianism According to Vedic Culture.