What are the Bandhas?

The internal yogic locks, or bandhas, are examples of such paradoxical techniques, and to understand why they are practiced they must be put into a context. What’s the point of closing off the throat (jalandhara-bandha), of contracting and lifting the abdomen (uddiyana-bandha), or of drawing inward at the center of the pelvic floor (mula-bandha)? We can get a glimpse of the reasoning behind these practices with the help of theories drawn from hatha, tantra, and kundalini yoga. Along the way we will also begin to look beyond the short-term benefits of yoga and see its transcendental goals.

SHAPING THE PATTERNS OF ENERGY

Like the changing designs of a kaleidoscope, patterns of energy within the body/mind are continually refashioning themselves. Each momentary pattern is a rich tapestry—the manifestation of complex interactions and multiple layers of activity. And like an airport terminal filled not only with travelers but also with flight crews, ticket agents, baggage handlers, maintenance staff, and shopkeepers, the human organism simultaneously functions at a variety of levels.

Every individual pattern of energy is a configuration of five primary energy functions, called the five forces of Prana. Among these, the two most prominent are prana (lower-case p) and apana (a-PAH-na), forces that regulate the acquisition and elimination of energy. The acquisition of energy, or prana, is characterized as an upward-moving process (“filling-up”) and it is associated with the chest and throat. There it governs the intake of air, water, and food. Apana, elimination, is symbolized as a downward-moving process (“emptying out”) and it is associated with the lower abdomen and pelvic floor. It governs such functions as urination, defecation, and the menses. 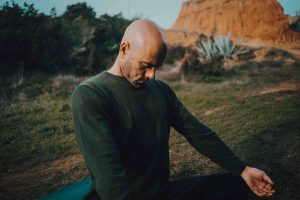 A third function of Prana, samana (sa-MAH-na), is centered at the navel region (the solar plexus) and governs the absorption of energy. The navel region is associated with digestion and with the generation of internal heat. In the kundalini system the fiery energy of this area is symbolized by a flame-filled, upward-facing triangle, with its base joining the two sides of the upper pelvis and its apex at the bottom of the sternum. From this hub energy radiates outward to the rest of the body in channels called nadis.

The activities of prana, apana, and samana, along with the other two functions of Prana (vyana and udana—the forces involved in the distribution of energy within the body/mind and in certain special functions such as speech) comprise one layer in the pattern of human energy. But to understand the role of the yogic locks we need to glimpse two additional dimensions of energy. Among these, the first is the role played by shifts in the mode of energy as we go through the day.

It is frequently said that the force of Prana is like a bird confined to its perch by two strong tethers. It tries to find its freedom, flying first in one direction and then in the other. But it cannot escape. Similarly, the force of Prana is tethered by two internal energies, or modes of functioning, but in this case the two energies can be merged, and liberation attained.

It is frequently said that the force of Prana is like a bird confined to its perch by two strong tethers.

The first of the two modes of functioning is expressed by the syllable ha and by such words as solar, masculine, rational, active, and heating (Chinese yang). This solar energy flows in a channel (nadi) called pingala ending in the right nostril. The second mode of energy is expressed by the syllable tha and by such words as lunar, feminine, intuitive, receptive, and cooling (Chinese yin). It flows in a channel termed ida ending in the left nostril. Subtle oscillations of these two energies shape everyday experience, profoundly influencing both physical and mental functioning. (When the two mantric syllables that symbolize these energies, ha andtha, are joined, they form the word hatha, a system of yoga designed to regulate and transform human self-awareness.)

Practitioners of kundalini yoga explain that when these dual energies of life are truly integrated, a natural inwardness ripens in the mind, and transcendental awareness begins to develop. At such a time Prana, the energy of consciousness, is said to flow upward in a single, central channel—termed sushumna—along the spinal column. This concept of two disparate but complementary energies merging into a central channel that leads to liberation is richly seen in traditional Indian culture in such images as the merging of the Ganges and Yamuna Rivers into the underground river Sarasvati at Allahabad, and the merging of night and day at dawn or dusk. It is also expressed by the suggestion in this ancient teaching that when intuition and logic are joined, then higher wisdom arises.

The second influence on the pattern of internal energy results from the natural polarity of the spinal axis. The upper end of the spine is described as the positive or northern pole, while the lower end is the negative or southern pole. Words such as “northern” and “southern” give a sense of direction, but it may be more helpful to think of the significance of these poles in relationship to our ability to be self-aware.

For example, when our thoughts and actions are instinctive and when they manifest with little self-reflection or inner awareness, then patterns of energy are predominantly driven by the lower energy centers of the spinal axis. There the mind is dominated by fears, unsatisfied cravings and desires, and the drive to control relationships and the environment. But as self-awareness grows, these same energies are transfigured. Fear is transformed into fearlessness; cravings give way to moderation and the desire to give to others; and the urge to dominate relationships yields to the satisfaction of working in coordination with other people and with the environment. Thus many teachers of the yoga tradition have said that self-awareness attracts the energy of the lower centers and elevates it.

To help bring order to the complex patterns of internal energies, and to enlist the body as a tool for the development of self-awareness, various internal locks were described by tantric masters and later adapted by hatha yogis. Three of these locks—the throat lock, stomach lock, and root lock—are fundamental practices of yoga that can be learned relatively easily and then further refined over a long period of practice.

The throat and root locks function in some respects to seal the upper and lower end of the spinal column. According to adepts, the throat lock temporarily prevents prana from moving upward and restricts the flow of energy through ida and pingala. The root lock blocks the downward movement of apana and pulls this energy back toward the navel region. When the upward- and downward-moving forces are thus blocked and forced into proximity with each other, then it is said that they function like two sticks being rubbed together: they produce heat. And this heat is magnified by the application of the stomach lock.

According to adepts, the throat lock temporarily prevents prana from moving upward and restricts the flow of energy through ida and pingala.

The concentration of energy increases with practice, and it is said that a striking phenomenon eventually takes place: in very advanced practitioners the intense heat created by the locks, coupled with retention of the breath, awakens awareness and leads it upward along the central path of the spine. It moves from the base of the spine toward its upper pole, from fear and instinctive craving to illumined self-awareness. This is the goal of yoga.

Combining these locks may ultimately yield dramatic results, but there is no point in imagining that the simple movement of muscles can miraculously redefine deep-seated patterns of thinking and feeling. These practices must be integrated into the entire complement of yoga disciplines and philosophy before they can have their effect. Our initial aim is to foster awareness and internal control, and this alone is said to have many benefits. These include:

Of course there are a number of cautions and restrictions that must be carefully observed as well. In particular the practice of these locks should not be done if you:

Finally, practice on an empty stomach, and before beginning, evacuate the bladder and bowels.

The simple technique to follow combines the three locks. It is not the only method for performing the three locks, by any means, but it is a good way to get started and it is easily integrated into asana practice. Naturally, each lock must first be learned individually. Here is a brief description:

The throat lock (or chin lock) restricts the upward flow of energy. It is most often used during periods of breath retention, but it can also be practiced without holding the breath.

The pelvic floor is a diamond-shaped area containing the anus, the genitals, and the perineum (the small area between the anus and genitals). The root lock is accomplished by pulling inward at the perineum.

The term uddiyana means “flying up.” In this practice the breath is held out while the abdominal wall is pressed inward and the contents of the abdomen are drawn up. This produces a hollowing at the base of the rib cage. Only after the abdominal contraction is released does inhalation follow. It is important to follow the steps of this practice very carefully. Breath retention should not be prolonged without the guidance of an experienced teacher.

The term uddiyana means “flying up.”

After you have mastered each practice individually, then combine them with the following practice (see the illustration):

Release with control and in the following order:

This practice will evolve over time and should not be hurried. Do it only once a day. If there is pressure in the eyes or temples, or if your breathing is labored, you have gone beyond your capacity. It is a beginning practice, which can be expanded under supervision. You will find that the confidence and control you gain from careful practice at this level will pave the way for further practice and provide a good start toward the remarkable benefits described in the yoga texts.

If God is Everything, Explain Immorality & Violence

What is a Vritti (Thoughts)? What To Do With Them?