Theory The Behind Origin of The Universe – According to Hindu Dharma

Cosmogeny or the branch of knowledge pertaining to the origin of the universe, for long has been a subject of speculation for the human civilization, it began right away with the philosophers of the Greek civilization. And for religion, if one were to describe in the words befitting its eloquence, an exotica, it would be.

While scriptures of most of the religion contain at least some accounts of their share of speculations, we will here embark on a journey by plunging deep into the profound scriptures of the Hindu dharma and decipher every one of the intriguing tales as possible.

While the cosmology, a prominent faction of the modern-day physics, boasts of the big-bang theory-a massive explosion 14.7 billion years where all the matter, even space and the time is believed to have begun, the scriptures of the Hindu dharma have a different take on it.

In the Rig Veda, the principle and the oldest of the Vedic scriptures, it is illustrated that the physical universe around us is the manifestation, or rather was created out of the body of primeval cosmic man Purusha when his body was sacrificed. Purusha, in the philosophies of the Hindu dharma, is revered as one of the two manifestations of Brahma, the Supreme Lord, the other manifestation being the Prakriti, or the eternal, indestructible reality. Purusha, meanwhile, signifies the creative consciousness or the energy that sets in motion the entire process of the Prakriti.

From the sacrificial fire, or the Yagna, Purusha was put into, the Rigvedic deities the Indra, Agni, and Vayu were born, together with the animals, plants, and humans; the cardinal aspects of the throbbing world. It was also then the strata of human society. Then, when the human society was stratified, the four varnas or orders were established; the Brahmins, the Kshatriyas, the Vaishyas, and the Sudra. 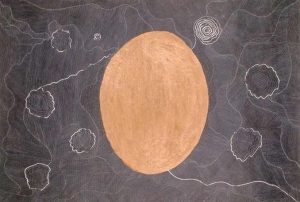 One mentioned in the Hiranyagarbha Sukta of Rigveda, the earliest stories of how the universe came into being is the tale of the cosmic egg, the Hiranyagarbha or Brahmanda, also sometimes equated with the golden fetus or the embryo. As it is mentioned in the Rig Veda, in the beginning, there was darkness, intensified darkness and floating in the dark void was the golden egg, the seed of elemental existence.

The Hiranyagarbha Sukta in the Rig Veda, the Vayu Purana, Bhagavata Purana and Brahmanda Purana mention the golden womb, the Hiranyagarbha or Brahmanda, the Cosmic Egg – that is sometimes interpreted as the golden fetus or embryo – that, floating in a dark void, contracted and gave birth to the universe and all that’s part of it – containing both male and female principles in union.

Once contracted, the golden womb yielded to the Creation process, heat or energy was generated. Molecules formed, and they interplayed with atoms and elements, giving rise to more heat in the form of self-luminous vapor.

The Hiranyagarbha is also equated with the life-giving Sun, an important agent of generation. In this context, the Sun is referred to as the soul or Atman of all Creation, the Lord of all that moves and stands. As the Lord of all created beings, the Sun or Savitr is also called Prajapati. Prajapati symbolized creative radiance, and then there was light where earlier, only darkness prevailed. 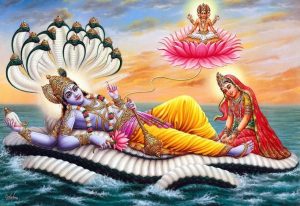 As the tales in the Garuda Purana, one of the eighteen Mahapurana Genre of texts and also the core scriptures of the Vaishnavism tradition of Hindu dharma, have it, there was nothing in the universe except the Brahman or the manifestation of ultimate reality. It is worth noting here that the Vaishnavism tradition regards Lord Vishnu as the Supreme Lord. The universe became an expanse of water, and in that Vishnu was born in the golden egg. Lord Vishnu created Brahma with four faces. Brahma then created the Devas, Asuras, Pitris, and Manushyas.

He also created the Rakshasas, Rakshas, Gandharvas. Other creatures came from the various parts of his body, for instance, the snakes from his hair, sheep from his chest, goats from his mouth, cows from his stomach, and others follow. His body hair became the herbs. The four varnas came from his body parts and the four Vedas from his mouths.

Lord Brahma created several sons from his mind, Daksha, Daksha’s wife, Manu Svaymbhuva, his wife Shatarupta and the Rishi Kashyap. Kashyap married thirteen of Daksha’s daughter and all the devas and the other creations were born through them.