The Three Streams of Yoga, Vedanta, and Tantra. – 108 House

The Three Streams of Yoga, Vedanta, and Tantra.

Finally, seeking to know in direct experience  that  which is  beyond all of these words, names, and forms, where each of these “systems” converge into one pre-existing whole, which has been called for convenience sat-chit-ananda, existence-knowingness-bliss, although actually indescribable. That direct experience is found when consciousness recedes up the sushumna channel (central channel of the subtle spine) in a process called kundalini-awakening, withdrawing into the brahma nadi, the finest channel leading to sahasrara, the crown chakra. Along the journey of receding, all experiences collapse, so to speak, into a point from which all experiences arose in the first place. That point is called Bindu, which means Point or Dot, and is sometimes likened to a Pearl, and is often related to the principle of a Seed. The Bindu is near the end of the subtlest aspect of mind itself, after which one travels beyond or transcends the mind and its contents. It is near the end of time, space, and causation, and is the doorway to the Absolute. To understand this principle is extremely useful, if not essential to Advanced Meditation.

Yoga, as described by Patanjali, is preparation or foundation practice, and is codified (arranged or systematized) in the four chapter of the Yoga Sutra. The word codified is commonly used because the Yoga science was recorded by Patanjali over 2000 years ago, although the science itself was not new, having been known for thousands of years before that time. Patanjali codified Yoga into 196 sutras (literally threads) outlining the path of Yoga (Sometimes divided into 194, 195, 196, or 197 sutras).

Yoga deals head-on with the obstacle of the mind and how to purify that mind so that it is an aid on the inner journey. It presumes that the seeker has done the preparatory work to be able to do these practices. Yoga science rests on the twin principles of cultivating practices (Abhyasa) that bring stable tranquility and non-attachment (Vairagya) . Yoga focuses on discriminating, in meditation, between consciousness  and matter at all of it’s levels . In that way, one comes to know the pure consciousness in it’s own being .

Yoga is also known as Raja Yoga, or the Royal Yoga, in that it encompasses the other Yogas. It is also known as Ashtanga Yoga, referring to the eight limbs described in the Yoga Sutra. Ashta means eight; Anga means limbs or rungs. (It is important to note that the phrase Ashtanga Yoga has recently become known as a system of physical postures, which was never the ancient intent of this name).

Vedanta provides a contemplative means of self-enquiry and exploration. Vedanta is expressed in the Upanishads, estimated to have been written in the period from the fifth to tenth centuries BCE, although the principles had been taught orally for a very long period prior to that; some say by thousands of years more.

The contemplative style of vedanta meditation suggested by the Himalayan sages is compatible with the meditation of the Yoga sutras The self-enquiry is coupled with the inner reflection on contemplative statements called Mahavakyas, as well as reflection on, and witnessing of the four functions of mind and exploring the three states of waking, dreaming and deep sleep so as to experience the consciousness that permeates all of those three levels, and which is symbolized by the OM mantra.

Of particular importance is the introspection of the waking, dreaming, and deep sleep levels of consciousness, which have as their counterparts the gross, subtle, and causal planes of reality. It means examining not only the conscious, but also the unconscious and subconscious levels of mind, so that these can ultimately be transcended. These levels are most succinctly summarized in the Mandukya , which deals with the levels of the meaning of the OM mantra.

Vedanta is expressed in the Upanishad, estimated to have been written in the period from the fifth to tenth centuries BCE, although the principles had been taught orally for a very long period prior to that; some say by thousands of years more.

To be able to successfully do the inner explorations and contemplations, it is necessary that the mind has been reasonably purified or stabilized. Then the fruits of the self-enquiry will come. Otherwise, the practices can merely lead to anxiety. 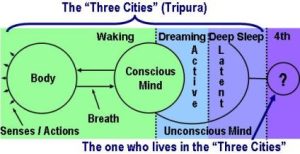 There are three schools of Tantra, of which the deepest, or subtlest is Samaya, a purely internal form of Tantra Yoga whose sole goal is spiritual liberation or enlightenment. It deals with the higher energy centers, up to the energy center at the top of the head, the crown chakra.

In the tradition of the Himalayan masters, it is this higher Tantra Yoga that is emphasized, and it rests of the solid foundation of the practices of purifying and self-reflection of Yoga and Vedanta.

In search of the source

For a very long time, many people, from many countries, from all of the major religions have traveled to the Himalayas in search of the wisdom and methods of the ancient sages. Occasionally, that wisdom or some part of it is found, assimilated, repackaged under a new name, and presented to the people of the world, of a particular culture, or from within a particular religious context.

However, when one asks what is the source of that perennial wisdom, or more accurately, how can one gain a foothold into that wisdom and practice, where does one turn? What system, philosophy, or texts might one study that captures the core teachings of those ancient sages of the Himalayas? And, more importantly, what methods might one practice?

It is out of that perennial fountain that these schools of Yoga, Vedanta, and Tantra practice have sprung. It is not a matter of the ancient wisdom being a composite of Yoga, Vedanta, and Tantra, like some cut-and-paste job. Rather, the tradition of the Himalayan sages is the source out of which these three, and others have emerged. They are the outpouring of that original fountain.

Even the Himalayan sages of today do not just practice one or the other of Yoga, Vedanta, and Tantra. Rather, they are fully integrated into a whole, much like three major strands of a sturdy rope work together. To study and practice this way is the way of the Himalayan tradition.

Control Over Mind and Its Modifications