The Meaning of Namaste and Its Spiritual Significance – 108 House

The Meaning of Namaste and Its Spiritual Significance

Namaste, a gesture we can observe people living a Hindu way of life, showing to greet each other while meeting and leaving their place, as a goodbye, whenever and wherever they may be, since the ancient times. Namaste is a form of greeting which in a sense means, “I bow down to the divinity within you”.

What does Namaste mean?

The meaning of namaste is to greet the divinity residing in everyone. At the same time, it is also a form of gesture done during the time of prayer and performing certain yoga postures. 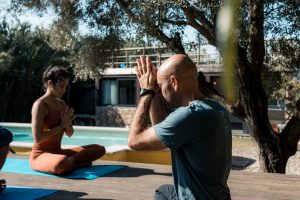 Why Do You Say Namaste?

In the world of diversified cultures and diversified processes of living life, people have love and acceptance for each other which maintains harmony in this planet. People respect each other for their deeds and for what they are. These emotions get certain expression and get carried out as an action and as a culture which influences one’s behavior. In the Hindu way of living, people convey this cultural expression as “Namaste“.

Namaste is used in various contexts. There are two aspects of doing ‘Namaste’, one is as a gesture and another is a gesture that is also along with the verbal greeting pronouncing it. As an action, it is used as a form of gesture of prayer to the divine or even during various postures of Yoga as an important ‘Mudra’. However, in the verbal context, namaste is said and performed to greet someone with respect.

It is not just a word, not just a common term, it is an outlet of one’s emotion to the other in a manner that makes them conscious about the connection they hold within themselves with each other. It is a behavior that one practices to welcome somebody or something into relation with regards and integrity. It is the way of bowing down to the divine energy residing as life within all of us, which connects everybody in one thread. It shows a sense of acceptance, honor, and politeness of an individual being.

It is also used as an expression of gratitude and thankfulness to what we have got and achieved in our life, to all the blessings and all the experiences that help us grow in this life journey. It is used during worship and while praying to God and even while asking for help to somebody. 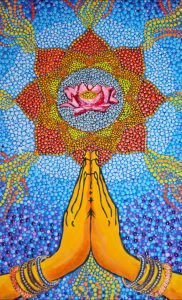 The essential nature of life prevailing within is all-inclusive and consciousness. Spiritually, Namaste means that we devote ourselves to inclusiveness, awareness, and wholeness. When we practice devotion to the divine, we surrender and let go all our identifications and feelings of separateness to that consciousness, with a Namaste.

The joining of both hands together represents unity and integrity and that we all are one family. It resembles “The Divine and The Self is the same in you and me”. Placing the hands in the heart region signifies that when we seek for our true nature and look in our hearts, we find the rays of inclusiveness that makes us realize that we are one with everybody and oneness is the ultimate reality.

Both hands come from a different direction but eventually, when they meet, they go in the same direction, together. Pertinent to the hands, whatever paths we may choose we are ultimately in the realm of oneness.

How Do You Do Namaste?

While doing Namaste, one should join their hands with palms open, facing and touching each other and finger pointed upwards to the sky. The joined hands should be placed just where the heart is located in the body so that the hearty and the exuberant emotions get into it. Then one needs to close their eyes, bow down and say Namaste filled with the feeling of fullness within one and can also touch the forehead with the tip of the palm.

Similar to most aspects of any culture, the way of doing ‘Namaste’ can differ to places. Earlier, a lot of importance was attached to the bowing of the head. In rural areas, the old tradition of saying Namaste is still followed. However, in the metropolitans, the style has undergone a major transformation. In contemporary times, most of the youngsters generally speak out the word Namaste but don’t really bother to fold their hands.

The History of Namaste

Namaste originally came from a Sanskrit word, “Namah”, which we can often see in Hindu scriptures and mantras and hear while chanting, which was first started as a practice in the Hindu regions like India and Nepal. “Namah” means “I bow to”, or in other words “salutations or prostration to” and “te” means “You” similar to “twam’ in Sanskrit.

Namaste is a Hindi as well as Nepali word; therefore, it is used extensively in the Northern states of India and Nepal. Also, it is widely used in the culture of Buddhists as well.

Other words similar to Namaste are Namaskaar, Namaskaaram, and Pranam. These are forms of traditional greetings, which also mean an act of bowing down with respect to something or someone, according to the ancient Hindu texts.

The spiritual meaning of Namaste essentially is the pouring of the sense of togetherness, oneness, and love, acceptance, and gratitude from one mind to the other mind or the environment. From youngsters to elders and from friends, relatives to a stranger, people say Namaste to each other. It is used to show respect to the elders, parents, and teachers, love and connectedness to friends and relatives, and to start a conversation with a stranger. When a great personality or someone something great, that we value and from which we benefit, we bow down to them with a sign of Namaste, as respect. It is used as admiration and reverence to something great and the divine entity which provides life energy to the body.

Meditation and Mantras For Children’s Well-Being