The Sri Yantra, also known as the Sri Chakra, is a mystical diagram used in the Sri Vidya school of Hinduism. Out of hundreds of yantras related to principles, deities and planets, the Sri Yantra is said to be one of the most auspicious and powerful of all. It’s called the ‘queen of yantras’ because all other yantras were derived from it. It’s also widely used in Hindu ceremonies and meditation practices.

The Sri Yantra is viewed as a sacred object in Hinduism, usually drawn on paper, fabric or wood. It can be found engraved in metals or other materials and is even designed in 3D form in metal, mud or sand. 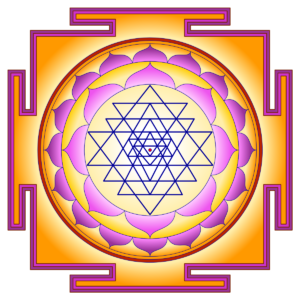 Although it’s been in use for thousands of years, the origin of this symbol is clouded in mystery. The earliest known portrait of the Sri Yantra is seen in the religious institution Spigari Majha which was established by the famous philosopher Sankara in the 8th century.

The Sri Yantra is said to be the symbolic form of all the Gods and Goddesses in Hinduism. According to Hindu beliefs Brahma (the Lord of the Earth) possessed it and Vishnu (the Creator of the Universe) praised it. The symbol has several elements, so let’s first examine what they represent. 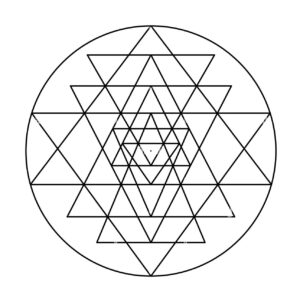 The outer pattern bears 16 lotus petals whereas the inner pattern has 8. These petals represent the sanctity of the diagram inside, used as a tool for yoga meditation. Each of the 8 petals governs an activity such as speech, motion, grasping, revulsion, enjoyment, attraction, equanimity and excretion.

The Sri Yantra continues to be highly sacred and revered by Hindus from all corners of the globe and is often considered to hold the answer to all problems and negativity in life. It’s believed that any person who uses the Sri Yantra can achieve greater peace, affluence, success and harmony.