OM Mantra and 7 Levels of Consciousness

Seven Levels: The OM Mantra is a roadmap for sadhana, spiritual practices (written as either AUM or OM). It is not for the person who seeks only the shallow waters of spiritual life, but rather for those who strive to realize in direct experience the depth of the Absolute Reality. There are four main levels of consciousness outlined in the OM Mantra, along with three transition levels, which is a total of seven levels. Each of these is experienced on the inner journey of meditation and contemplation.

Universal Realities: It is important to be aware of the fact that these levels of consciousness are realities that exist universally, regardless of whether or not one uses the OM Mantra or the visual OM symbol in any way. In either case, the underlying principles are extremely useful for all seekers in purifying or clearing the mind, and seeking the direct experience of deeper truths. 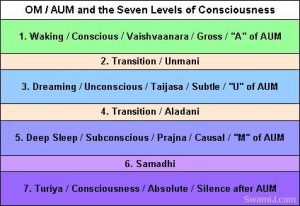