The sacred syllable OM, ॐ [AUM] is the primary symbol of God, a deity who wears an infinite variety of shapes, colors, structures, nature itself in infinite manifestations. The symbol OM is found in the Hindu conception as the supreme being. This mystical syllable contains and closes all that is sacred in Hinduism.

OM is the very evocation of the universal soul; it is known as Pranava Mantra.  OM is the reflection of the known absolute reality, without beginning or end and embracing everything that exists, representing the supreme vibration, the infinite. 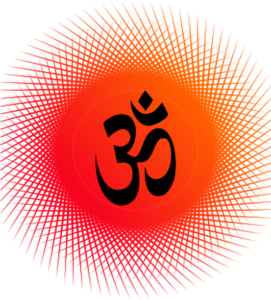 The Sanskrit word OM (ॐ) is pronounced AUM and represents the threefold time-division (wakefulness, dreaming, and deep sleep). It also rapresents God, the source of universal consciousness. It is considered the sound of creation, which represents everything in the creation and allows its practitioners to cultivate energy that flows upward through the chakras and then outward through the crown.

According to the texts of yoga, Hinduism, and Buddhism, OM is also considered the mother of mantras – short and strong sounds related to each chakra. It connects to the third eye or the crown chakra, connecting us with the Divinity.

A study published in the NCBI found that this mantra reduces activity in the limbic system, which is the part of the brain associated with stress and emotions. By monitoring brain activity, researchers found that incantation relaxes the brain and thus could reduce stress. Another study found that it could be used to treat depression.

If you are familiar with meditation, you can imagine how this benefit takes place. The yogic texts remind us about the 8 branches of yoga, and the sixth is Dharana, the Sanskrit word for concentration.

In concentration practice, one can meditate and chant mantras to reach maximum concentration. In this context, this means that the yogi is fully present, and thus there is the possibility of slowing down the mind either to focus on a single subject or to reduce it to complete silence.

OM is in the connection to the body’s chakras. The main chakras are located in the body from the base of the spine to the top of the head. These chakras are like energy centers, and when they receive the influence of the sounds of the OM, they react positively, triggering internal energies and reactivating the person’s energy balance.

A Harvard study found that chanting OM can alleviate the symptoms of irritable bowel syndrome and improve bowel health. The study showed that by inducing the relaxation response, participants showed reduced symptoms as well as decreased anxiety and a better life. Enchanting OM can also induce a state of relaxation, as this is a common meditation practice.

In the past, meditation has been shown to improve heart health. If practiced by chanting the mantra OM several times in a row, this can be seen as a form of meditation. A 2006 study looked at the effects of transcendental meditation, a form of meditation in which the practitioner continually repeats a mantra OM, and concluded that this mantra can improve blood pressure and lower the risk of coronary heart disease.

The enchantment of the mantra OM creates a positive vibration in the body, which can then attract positivity in your own life. Enchantments allow you to focus on the third eye chakra and look inward. If you can’t stop negative thoughts, try chanting the mantra OM a few times, and you will only have good results.

Om has real virtues for the body. It vibrates the rib cage, and the inside of the body vibrates at the sound of it. The lungs benefit from the deep exhalation that precedes it, opening fully. Breathing clears all the air from the lungs. These often contain somewhat stale air. The practice of yoga and Om are therefore indicated to ventilate and purify oneself – preferably in a space well ventilated for you.

Chanting OM is beneficial not only for those who practice but also for those around them. Pronouncing OM produces the sacred vibrations which override the negativities circulating in the surrounding environment. Also, chanting OM maintains or prevents positivity from leaving the premises.

10. Maintain the rhythmic activity of the heart

If you ever feel a little down, chanting OM can help you connect with Self and balance your emotions. You may find that as you chant, your mind begins to clear. It is because you are focusing on the sound or vibration that OM is making. OM has the same frequency as everything in nature, allowing you to connect deeply and turn inward.

The research showed that OM chanting can improve alertness, even when already relaxed, a fact noted by a reduction in heart rate. A group of meditators who chanted OM showed a statistically significant reduction in their heart rate compared to a control group engaged in non-targeted thinking.

Studies have shown greater mental alertness combined with a relaxed state during OM chanting; they also revealed a greater sharpening of the senses. In other words, chanting OM and meditating helps you become more present by getting deeply in touch with your body and your environment through sight, hearing, smell, taste, and touch.

These are just a few benefits that you can obtain when chanting the OM mantra. To realize all the benefits of chanting OM, you need to practice yourself and feel the experience. There’s no right or wrong way to meditate and chant OM, you can chant OM as many times you want, but the ideal number would be 108 times.

Brahma Muhurta – Best Time To Wake Up In The Morning