Life on earth is believed to be under the surveillance of Gods and everything that is happening is because of their will of doing so. They are believed to have created this whole universe, and they hold the power to destroy it as well as destroy all sorts of sins that deny the meaning of this life, they have bestowed us with.

According to Hindu Scriptures, the Hindu Trinity, Brahma, Vishnu, and Maheshwar (Lord Shiva) are responsible for the respective roles of creation, protection, and destruction of the universe. Lord Shiva is known for the destruction but not an arbitrary one, the destruction is for recreation.

At the point of Maha-Pralaya, creation ends when manifestation is withdrawn back into the Great Void. This is when Lord Shiva releases the destructive energies to dismantle all of the creation by performing a cosmic dance known as Shiva Tandav. This form of Shiva as a cosmic dancer is known as Nataraja. While there are 19 different avatars of Shiva however, ‘Nataraja’ is not an avatar but Lord Shiva himself as the divine dancer. 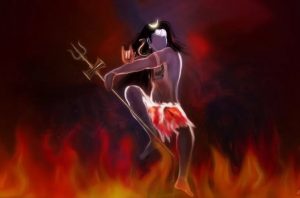 Nataraja is Shiva during the apocalypse dances called the cosmic dance of Shiva “tandav” symbolizing the interplay of dynamic and static divine energy flow, which contains five principles of eternal energy- creation, preservation, destruction, illusion, and emancipation. As science states ‘energy can neither be created nor destroyed, the destruction initiated by Shiva with his cosmic dance is a medium for recreation and the cycle never ends.

His cosmic dance in an aureole of fire, causing wild thunderstorms all around the world, and not only the earth is affected, but also the Sun, the Moon, and the stellar bodies with his matted hair, marks of ash on forehead, the damaru, and trident. He lifts his left leg balancing the right above a demon of ignorance. This cosmic dance of Shiva is best described in the popular Shiva Tantav Stotram composed by Ravana.

Nataraja – The Lord of Dance

The artistic form of Lord Shiva, Nataraja is believed to have appeared near the town of Chidambaram at the confluence of two rivers, Vellar and Cooleran when a group of sages tried to control Gods with black magic and troubled everyone. Lord Shiva then took a form of a beggar called Bhikshatana to put end to the arrogance of the sages. Bhikshatana was so beautiful that even the Mohini avatar of lord Vishnu him and so did the wives of the sages. 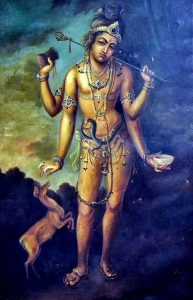 Irked by these events group of sages threw dreadful serpents on him which Bikshadana wore as ornaments, they sent a tiger with magical power, he on the other hand tore the skin of that tiger and wore it as his loincloth. Then an elephant originated from sacrificial fires was sent which was killed by Bikshadana. Knowing that nothing was working against Bikshadana they submitted all their powers and gave birth to a Rakshasa named Apasmara, a symbol of arrogance and ignorance. But the lord over whom no magic worked, stepped on the Rakshasa and danced gracefully, this ecstatic dance of Shiva is ‘Tandav or the cosmic dance’, and the lord was called ‘Nataraja’ the King or Lord of dance. This dance made sages realize who the beggar actually was and removed their arrogance.

Nataraja as a symbol is a marvelous invention combining Shiva’s role as creator, preserver, and destroyer in a single image and each of the elements in the image has a unique meaning to it.

The Damaru Shiva holds in his upper right hand is said to make the first sound of creation, the heartbeat of the universe, the Maya, the divine fire (Agni) on the upper left hand signifies the holocaust, with his lower right hand he makes Abhayamudra; the gesture that calms all the fear and the left-hand makes the gesture of Gaja hasta, the symbol of salvation and liberation. 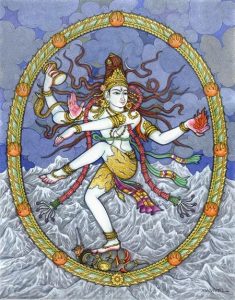 His right foot stamps on the dwarf figure, Apasmara Purusha who represents illusion and ignorance, leading humanity away from the truth. The matted hair spread during the dance from which his energy and wilderness disperse, his lock contains a skull, a datura blossom, and a crescent moon depicting that Shiva though he is invisible, he is always present. Ganga, the holy river resides in his hair which also signifies creation and destruction. The two eyes portray the sun and the moon, and the third eye defines knowledge and insights. Together they symbolize an equilibrium of three Gunas- Sattva, Rajas, and Tamas.

Shiva in his Nataraja form dances within a flaming halo (Prabha Mandala) that symbolizes time and is presented in a circle as it is cyclical and never-ending. Though the cosmic dance releases energy, passion, and wilderness, Shiva has a smiling face.

The Lasya or the gentle form of dance, known as ‘Ananda Tandavam’ or dance of bliss is performed by the Goddess Parvati after the destruction. This dance is performed for the creation of the world after obliteration. Both of his dance takes place in one’s Chitrambalam (in the sky of one’s mind), which is portrayed as the center of consciousness situated at the altar of one’s heart.

Thus Nataraja, the king of dance is basically associated with the creation and destruction of the world or we may say of illusion and ignorance that lead humans away from reality.

Shiva Loka – The cosmos we live in