The typical public perception of Yoga has shifted significantly in recent years. This article addresses the nature of those shifts, comparing traditional Yoga of the ancient sages to the modern revisions. The article also includes quotes from nine different teachers whose names are well known.

The starting point of most classes, books, magazines, articles, websites, and blogs on Yoga are so different from traditional Yoga of the ancient sages that it can be fairly called “Not Yoga”. The wave of Not Yoga seems to morph further and further away from Yoga. 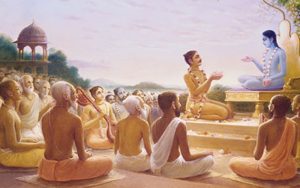 “Traditional yoga” has historically been taught orally, and there are subtle nuances among various lineages and teachers, rather than there being some one, precisely agreed upon “yoga”. Principles are usually communicated in sutra style, where brief outlines are expanded upon orally. For example, yoga is outlined in 196 sutras of the Yoga Sutras and then is discussed with and explained by teacher to student. Similarly, the great depth of meaning of Om mantra is outlined in only 12 verses of the Mandukya Upanishad and is expanded upon orally. Over 10% of the 700 verses of the Bhagavad Gita specifically contain the word ‘yoga’. This article also does not claim that there is a single, universal “Modern Yoga”. Here also there are many different faces. However, there has been a quite significant overall shift in the perception of yoga, and that is worthy of comment and ongoing examination.

Traditional view: To the ancients, Yoga is a complete system, of which the postures are a small, though quite useful part. The word “Yoga” referred to the whole, not merely one part, which is the postures, or Asanas. The entire purpose of Yoga is spiritual in nature, according to the ancient sages.

Asana classes and asana studios: It is so unfortunate that the word “Yoga” has so often been used in place of the word “asana” or “posture” in recent years. We would not call a brick a “house” even though it is part of the construction. Yet, this is what is often done with Yoga. The first word of Yoga Sutras is “atha” which means “now,” implying a prior preparation. One may do postures for years and finally be ready for Yoga. To call it “Yoga” before that time is a misnomer. If we had “asana classes” and “asana studios” that would be a great service to people. Then the word “Yoga” could be appropriately used for the journey that one begins when truly understanding the history and nature of authentic, traditional Yoga.

“In spite of the immense popularity of postural yoga worldwide, there is little or no evidence that asana (excepting certain seated postures of meditation) has ever been the primary aspect of any Indian yoga practice tradition… The primacy of asana performance in transnational yoga today is a new phenomenon that has no parallel in premodern times.”
(page 1 of the Introduction)

“Singleton shows that, contrary to popular belief, there is no evidence in the Indian tradition for the kind of health and fitness-oriented asana practice that dominates the global yoga scene of the twenty-first century. Singleton’s surprising and surely controversial thesis is that yoga as popularly practiced today owes a great debt to modern Indian nationalism, and even more surprisingly, to the spiritual aspirations of European bodybuilding and early 20th-century women’s gymnastic movements of Europe and America, than it does to any ancient Indian yoga tradition.”
(back cover of the book)

Within the past few decades there has been a new invention, that of the yoga “mat”, which is made of some sort of synthetic rubber or plastic material. This has lead to the idea that “yoga” is practiced “on” such a mat. Since the mat is designed to be used for physical postures or asanas, its invention has even further led to the distortion of yoga. Along with the invention of yoga “on the mat”, there has been a subsequent invention of yoga “off the mat” to describe the “other” form of yoga. Google presently reveals 1,220,000 results for a search of “yoga off the mat”. While it is good that people are doing other such practices, the mere fact that “yoga off the mat” has come into vogue implies that the default position of real yoga is “on” some synthetic “mat”. This is just one more example of setting aside the ancient tradition of authentic yoga for the sake of promoting the modern distorted yoga through all of the yoga business channels.

Yoga or something using the name “Yoga” has gotten so big and has had such great commercial success that there is now a business category known as the “Yoga Industry”. Googling the term “Yoga Industry” reveals 92,800 results. The last survey (2008) conducted by Yoga Journal magazine (USA) reports that it is a $5.8 billion per year industry, and that over 34 million people in US either practice yoga or are interested in it.

The goal of Yoga is Yoga: The goal or destination of Yoga is Yoga itself, union itself, of the little self and the True Self, a process of awakening to the preexisting union that is called Yoga. While it is not the intent of this article to give a final or conclusive definition of the term Yoga–which can be described in different ways–it has to do withthe realization through direct experience of the preexisting union between Atman and Brahman, Jivatman and Paramatman, and Shiva and Shakti, or the realization of Purusha standing alone as separate from Prakriti. The mere fact that one might do a few stretches with the physical body does not in itself mean that one is headed towards that high union referred to as Yoga.

If God is Everything, Explain Immorality & Violence