Kathopanishad The Mystery of Death and the Meaning of Life . – 108 House

Kathopanishad The Mystery of Death and the Meaning of Life .

The Upanishad examined in this book is the Kathopanishad, a scripture that unveils the mystery of death and the meaning of life.

An old story is told about the beginning of time. The universe was in the process of being created and not everything was yet in order or fully functioning. Before the universe could be totally engaged, the Creator had one final task to complete. To help him complete this task the Lord summoned an angel.

The angel came. The Creator told the angel that he, the Lord, had one last job to do in the making of the universe.

“I saved the best for last,” the Creator told the angel. “I have here the real meaning of human life, the treasure of life, the purpose and goal of all this that I have created.

“Because this treasure is valuable beyond description,” the Creator continued, “I want you to hide it. Hide this treasure so well that human beings will know its value to be immeasurable.”

“I will do so, Lord,” said the angel. “I will hide the treasure of life on the highest mountain top.”

“The treasure will be too easy to find there,” said the Creator.

“Then,” said the angel, “I will hide the treasure in the great desert wilderness. Surely, the treasure will not be easily found there.”

“In the vast reaches of the universe?” asked the angel. “That would make a difficult search.”

“No,” the Creator said pondering. Then his face showed a flash of inspiration. “I know. I have the place. Hide the treasure of life within the human being. He will look there last and know how precious this treasure is. Yes, hide the treasure there.”

This treasure and the search for it are the subjects of the Upanishads. Given the nature of human beings, that treasure was indeed well hidden. As the Lord said in the story above, the last place human beings will look for the ultimate Reality is within themselves. They will look to all the diverse objects of the world for meaning, and each time, with each well-meant effort, come away with nothing worth having. In this way a perpetual cycle of births and deaths is created. They spend life running after things that are only temporal and when death comes they are empty handed, with just an invitation to do it over again.

The Upanishads say the ignorant person keeps accepting that invitation, but the wise person sees the futility in the endless pattern of death and rebirth, and looks within for that which is eternal.

According to the Upanishads, that which we seek within is called Atman, the pure Self, our real identity, that, as the Bible says, is in the image and likeness of God. The real Self is not recognizable by the senses or the mind. It is the hidden treasure within the soul, and dwells in the innermost chamber of the heart. It is very subtle, unfathomable, and eternal. It existed at the beginning of creation, exists now, and will continue to exist in the future. 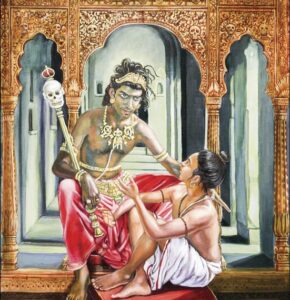 The phenomenal universe, as the Upanishads explain repeatedly, is impermanent and constantly changing, evolving, growing, decaying, and dying. It goes on endlessly this way—coming, going, dying. That is its nature. Anyone who becomes attached to the phenomenal world with all of its changing forms is sure to come to grief in the end. Yet the phenomenal world plays a role in bringing a person to the realm of the immortal. The pain and fear of death that are natural to the material world are meant to guide a person toward wisdom. A time comes when the individual realizes that there must be more to existence than this. Then he or she begins to seriously look for an alternative as the ultimate purpose of life.

The Upanishad examined in this book is the Kathopanishad, a scripture that unveils the mystery of death and the meaning of life. Of all the Upan-ishads, Kathopanishad is the most lucid and accessible on the knowledge of Atman here and hereafter. It clearly defines the alternatives confronting humanity concerning the purpose of life and the ultimate choices that have to be made.

This Upanishad is a beautiful, poetic explanation of the mystery of life and death, the law of karma, and how to attain liberation from grief and distress. It is composed in one hundred nineteen mantras and constructed around a dialogue between a spiritually minded young man named Nachiketa on one hand and Yama, the king of death on the other. Yama, unlike portrayals in Greek or Roman mythology of the king of death, is not something dreadful. He was the first man born on the earth to die and was a self realized master. In this scripture, Yama may be compared to the highest discriminating intelligence of the human being, while Nachiketa represents the lower mind, albeit with strength and courage.

The dialogue between the two reveals the character of a dedicated but yet unrealized spiritual seeker. Nachiketa is someone we can understand as well as admire. Though he has many doubts, his faith is indisputable. Above all he harbors a deep desire for the highest knowledge and ultimate happiness.

Nachiketa is tested by Yama to determine how strong his desire for truth is. Is it stronger than the attractions to the things of desire in the world? Yes. Nachiketa renounces everything for the sake of Self-realization. Above all else he wants to know Atman, the real Self.

In his faith Nachiketa knows that all the pleasures, even the highest joys of life, do not continue forever. They pass away, leaving pain in their wake. No matter where one goes, or what one does, as long as worldly desires are present there can be no real peace. It doesn’t matter whether a person lives totally in the world, surrounded by and fully partaking of the world’s pleasures, or in the wilderness apart from all enticements. Whenever there are desires for worldly things there will be discontent. Death is no more an escape from all these desires than is the barren desert wilderness. People cling to their desires till death and drag them all back with them again to the worldly plane where they can be fulfilled.

It is only in practical daily life that people can deal with desires and attain self-control over the senses and thoughts that drive the desires. People must learn to rise above desires and see their limited value. Only when they rise above desires and gain mastery over their senses and thoughts will they begin to realize real joy. They will see that as they let go of their attachments to worldly things, including their own material bodies, they will begin to experience a sense of peace of immeasurably greater value than any wealth or comfort material existence could ever offer.

Nachiketa understood this innately. You might say his conscience was directing him, and he had the courage to follow his conscience instead of tracing the well-worn steps of so many others who chose the path of material pursuits.

The path described by Yama in the Kathopanishad is the path of yoga, whose aim is the spiritual union between the individual soul and the supreme Self of all.