Kalachakra is a Sanskrit word made up of two terms; kala meaning “time” and chakra meaning “wheel”, literally translated into English as “Wheel of Time”. But what does that actually mean? To answer this question, we will need to look at Kalachakra from multiple dimensions or levels of understanding.

At the most superficial level, we could simply say that Kalachakra is the nature of everything. Or put another way, everything which exists is of the nature of cycles of time. There is nothing which exists outside this constant nexus of changing cycles. If we look outward to the universe with its many galaxies and solar systems, we can see endless cycles of change playing out over the past, present and future. It is in this way, that every thing is contained within the Outer Kalachakra. 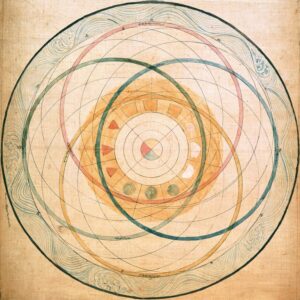 Moving from macro to micro, we can then consider the nature of the beings which inhabit this universe. At the level of an indivudual person, Kalachakra can be understood to be the very subtle structures of a person’s body and mind. This is known as the Inner Kalachakra. It includes not only the structure, but also the dynamic influence that the mind/body complex has on the surrounding universe. Therefore, through understanding this Inner Kalachakra we are able to break free from the dominance of our external conditions and transform our experience in order to create a harmonious and peaceful environment. 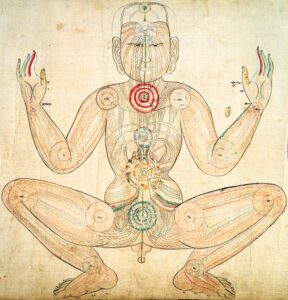 If we go even deeper though, we discover what is referred to as the Pure Form Kalachakra (also known as the Alternative or Enlightened Kalachakra). At this level we are still talking about cycles of time, but the meaning of these words becomes completely different.

At this ultimate level, we speak of the unchanging or immutable cycles of time, which are the union of immutable bliss and empty form. This union is depicted by the Kalachakra deity in union with his consort. The masculine aspect of Kalachakra represents the mind of immutable bliss, while the female aspect of Vishvamatha represents the sublime empty form. These two are in fact of one essence, representing our own absolute nature.

Our ego self is the combination of our external universe and our internal being. Our true self though is this deepest absolute level, our sacred truth. Through practicing with our subtle body and mind, we are able to purify our coarse perceptions and experiences, thus unveiling the complete mandala of Kalachakra pure forms. 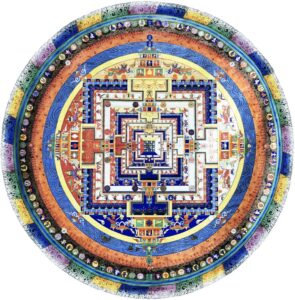 The Kalachakra Tantra is known as the “King of Tantras” due to its expansive and comprehensive presentation. Within a single system you can find detailed instructions for understanding a wide variety of scientific knowledge such as cosmology, astrology, medicine, psychology and philosophy. While it’s scope is all inclusive, it presents this information in a very clear and direct manner. This is in stark contrast to other esoteric systems which are couched in hidden symbolic language.

But Kalachakra is not merely a body of theoretical knowledge. It also presents a complete selection of yogic practices designed to cut through delusion and to actualise direct insight into the nature of reality. These extremely effective and powerful methods allow even non-academic practitioners to develop the most profound of realisations within the span of a single lifetime.

The Kalachakra Tantra was first given to Suchandra the Great Dharma King of Shambhala. Eight generations later, King Manjushri-Yashas united his kingdom by bestowing the Kalachakra initation to all of his subjects. Through this massive shared experience, Yashas created a single vajra family and became known as the first Kalki or “Holder of the Lineage”. Since this time, the Kalachakra Tantra has been closely connected to cultivating different levels of peace and harmony in the mindstreams of practitioners. For some this will mean achieving the state of Kalachakra enlightenment. For others it will mean being born in the pure land of Shambhala. At the very least, it will mean creating the conditions to be born during the second golden age of dharma in this world.