When people think of Hindu goddesses, most people think of elegancy, love, and the counterpart of their consorts. But goddess kali is different in every way.  Kali is the feminine form of time (energy of time) and one of the ten Mahavidyas. With her tongue sticking out, she symbolizes wrath, power and sparks fear in the eyes of great lords. With her outstretched tongue, she drinks the blood of Raktabija. 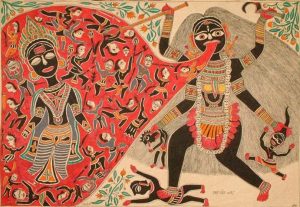 Goddess Kali is the destroyer of the evil forces of the universe, the most powerful form of Goddess Shakti, or Adi Shakti (the first energy, creator of the universe). Kali is often shown as standing on the god Shiva, her consort. She wears a necklace made of heads of the demons, and she is dark, a color that means she is beyond all qualities of nature. She has a sickle, sword, ax, and whip along with a flower signifying creation on her hands. Maa Kali is the chief of Mahavidyas, a group of ten Tantric goddesses, divine Intelligence.

Goddess kali originated from Goddess Durga’s anger to slay the asura named Raktabija (blood-seed). Raktabija was so fierce because he could spawn from every drop of his blood that touches the ground. Goddess Kali is seen carrying the demon’s head and a plate to hold the blood from touching the ground.

When goddess Durga became so enraged, her wrath emerged as a goddess from her forehead in the form of “Kali.” She was so fierce that she tore down and ate all those who came across. It seemed impossible to calm her down. Seeing all their efforts fail, gods went to Lord Shiva to ask him to calm her down.

Shiva laid down on her path, which is often how she is portraited. Kali was so consumed with her bloodlust she did not realize she was standing on her own husband. When she realized what she had done, her modesty and shame calmed her down and saved the world. 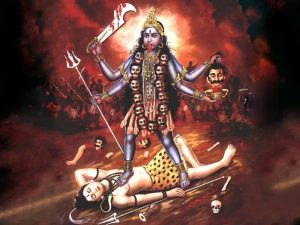 Kali is derived from the Sanskrit word “Kala,” which means, Time. It also means “she who is black’ – feminine noun of the Sanskrit adjective Kala. She is a dark-colored woman, a counterpart of Goddess Gauri, who is fair, both being forms of Shakti.

Goddess Kali is shown as a slayer of demons where she stands with one foot on Shiva and holds a severed head. She wears a skirt of severed human arms and a necklace of decapitated heads. Her hands show the form of both creation and destruction. The earrings kali wears are small embryos. Kali likes followers who have childlike qualities in them.

Goddess Kali is said to have 8, 12, or 21 different forms based. Some of her well-known forms are Bhadra kali, Maha Kali, Dakshina Kali, and Chandika. Different forms of kali are worshipped in different parts of South Asia. Dakshin Kali is the most popular form of Kali in Bengal.

Even looking at her requires courage; she really has got a terrifying appearance. Then why is she called Maa kali by all her worshippers and followers? Kali symbolizes the superiority of females in nature. She is that mother who could go to any lengths to protect her children. She is a mother who suffers pain to evoke her children. She is the symbol of Shakti, feminine power, and creativity. The devotees who fall at her feet in devotion or surrender in front of her can achieve moksha by touching her feet.

Kali dominates tantric iconography, texts, and rituals. In those Vidhya’s, kali is considered the highest of all deities. Kali is time herself. As stated across many Vidhya’s, Kali will consume the world at the end of time; then, the world will be dark and unbound like her. She is the destroyer of the universe as her counterpart Mahakaal (Lord Shiva). Thus, worship of Kali is done to victory over the universe’s greatest power, time itself. Kali is worshipped in cremation grounds in the darkest of the night. The goal of tantric gurus is to become reconciled with death and learn to accept death the way it is.

Kali is especially worshipped in the Kalaratri, the seventh day of Navratri, which starts from the new moon day of Ashwin for 9 days. The practice involves animal sacrifices in many temples and a tantric priest to instructs on sacrificial rituals. 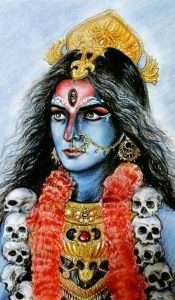 Kali is the most misunderstood goddess in Hindu Religion. She is often feared and only considered the goddess of witches and tantric. In a patriarchal society, Kali is the true and oldest representation of female supremacy over nature. Kali teaches us to see life not as something indifferent to life but as a part of life. She defies the definition of an ideal goddess and is beyond the understanding of humankind and the rules of nature. Created to destroy, she still has a core of love and motherhood.

Lord Brahma – The God of Creation in Hinduism