Learn to have an even temperament by not losing your temper every now and then.

Sadness and loneliness are two companions on the path of sadhana. Your mantra is your great companion and you should never have to face moments of despair.

Emotions, if properly directed, can lead you to the highest state of ecstasy.

All sadhanas have a central theme: to have an orderly mind that does not create obstacles to the path of unfoldment within and does not hinder success in the external world.

The body is your physical instrument for living in the external world. Your mind or internal instrument is antah-karana. The antahkarana has four faculties that function in the interior world: manas (active mind), chitta (subconscious; storehouse or reservoir of subtle impressions or samskaras), buddhi (intellect), and ahamkara (ego, the sense of “I-am-ness” or individuality). Manas has five subtle senses and five gross senses to experience the external world—the world of objects. Coordinating the four faculties requires real effort and makes the mind creative, useful, and productive.

These four faculties of the mind should carefully be observed and their functioning should be analyzed in day to day life. As you keep accounts and know how much money you have spent and what your reserves are, you should also be able to keep account of the functions of the mind, both within and without.

Thought, action, and speech are the three main objects to be observed. How am I thinking and feeling, how am I speaking, and what motivates me to speak? Is the way that I am speaking helpful for me and others?

Thoughts come and go—do not brood on them. All thoughts have some origin. Find out from where they arise. If you throw a pebble into a lake, it will create ripples twice; first, when you throw it, and then again when it settles at the bottom of the lake.

Don’t allow thoughts to settle in the lake of your mind. If an unpleasant thought comes, let it go. Don’t get disturbed. Otherwise, you will lose the constant battle waged by your thoughts. Be friendly to your mind and don’t create animosity toward it.

Any creative thought enveloped with selfless love and selfless service toward others, if not expressed and executed, is like a treachery and an abortion. If creative thoughts are not brought into action, frustration arises, which can create repression. One day that repression is projected through the body as a disease or ‘dis-ease.’

Wherever you go, you will carry your mind with you. You have to start working with it, wherever you are. It is of no use knowing God, for he always exists everywhere. It is of no use knowing the world, because it is already there, and it has been known and analyzed by many in the past. The mystery lies between the two, and that is the mind. The mind can transport you to a higher realm of wisdom, and can come in touch with the collective consciousness.

Sadhana is for the mind. If the mind is trained, you have attained. If the mind is not purified with a definite discipline, it will suffer from the age-old epidemic of hallucination. Those who do not know sadhana, go on quarreling with the mind until the last breath of their lives.

Unless the mind is trained in a coordinated way by understanding all of its modifications, it remains unruly, disorderly, and enveloped in its primitive dharma. An untrained mind interferes with the spontaneous feelings arising from the heart.

Mind is the cause of both bondage and liberation. A one-pointed mind can help one go within and unveil the mystery of inner life, whereas an undisciplined mind remains dissipated.

An outwardly oriented mind runs from one object to another, hoping to find peace and happiness in the external world. Lacking inner awareness, the mind refuses the guidance and inspiration of the subtle Divine Force. A mind not guided by divine illumination stands as a wall between the aspirant and his goal. Having such a mind, one fails to study the inner dimensions of life, and as a result, considers the external world to be the sole reality.

To attain perfection here and now, one must undertake some spiritual discipline. Without practice one cannot attain control over the modifications of the mind. Unless the mind is made one-pointed, one cannot unfold one’s inner potentials.

The method of making the mind one-pointed is called meditation. Through meditation, an aspirant withdraws his mind from the external world, focuses on a given internal object, and develops an interest in delving within.

Once an aspirant has attained freedom from the distractions originating in the conscious part of the mind, he can have a better grasp of the thought constructs that originate from the unconscious mind. Through undisturbed, prolonged practice, a student dives deep and becomes familiar with his inherent potentials. He observes how the experiences of the external world are a mere reflection of the inner world.

There is no conflict in life. Conflict lies in the mind. The mind needs training. Even though a trained mind is not capable of leading one to the summit, it will remove all the obstacles along the way. A free mind is the grace of the Lord.

Never identify yourself with your mind, its objects, emotions, speech, or actions.

The doer is different from the deeds. Never identify with your actions, thoughts, and emotions, but remain in eternal delight by establishing yourself in your essential nature that is peace, happiness, and bliss. 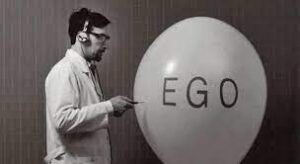 A person walking on the path of self-transformation should be aware of the dangers of egoism. Even while practicing the great virtues of truthfulness and nonviolence, a person can feed the ego. The ego related to the realm of spirituality is more subtle and injurious than the ego related to one’s worldly success.

A person becomes a slave to his ego when he thinks of selfish gains. A selfish person dwells in a state of doubt since his conscience constantly reminds him of his wrong attitude. On the one hand, he is pulled by his selfish desires, and on the other, he is alarmed by his inner voice. He is torn apart by these two forces.

Do not ever condemn yourself in any way. Learn to appreciate and admire yourself, but see that you do not feed your ego. It is the arch enemy on the path, though it can be polished with some effort.

Acknowledge your weak points, let the power of discrimination counsel your ego, and make a strong resolution to overcome your weaknesses. While working on the removal of weaknesses, you have to be very vigilant. Ego does not want its weaknesses exposed. The more you hide your weaknesses, the more they grow. Remind yourself that you are on the path of inner purification and self-discovery. It requires great courage. Stand firm during this internal battle, and support your Atman, even at the cost of dismounting the ego and all its retinue.

Only a profound method of meditation can help to purify the ego. A purified ego does not create barriers.

By practicing diligently, one may attain concentration of mind, one may speak the truth, and one may serve others, but one cannot realize the Truth unless one surrenders one’s ego to the higher Self. Only after rising above egocentric awareness, can one find the universe within. Only then can one learn to love all and exclude none. One who does not love one’s fellow beings, cannot love God at all.

Humanity is suffering from ego-born differences and inequality. People discriminate against their own brothers and sisters simply on the basis of race, religion, caste, or complexion. In order to be free from these problems, a political settlement alone is not enough.

When all human beings understand that their suffering has been brought on by ego, only then will they resolve all their differences. They will throw aside the confinements of race, caste, religion, and sectarian feelings. Instead of identifying themselves with a particular group or community, they will identify themselves with all human beings. They will love all as their own family members.

The ego is very useful in helping you to function in the world, but it’s not very useful as far as deeper happiness is concerned. The ego is that which separates you from the Reality, from the Truth, from the ultimate Source.

The most important step toward self-transformation is to shed one’s ego, to surrender it to the higher Reality, and thereby attain the light of discrimination and pure faith.

Once ego surrenders itself to the highest Truth, you have attained victory, and spiritual illumination is yours. Soon after the victory over ego, all other virtues, such as humility, love, selflessness, compassion, and kindness, spontaneously unfold. These virtues are prerequisites for self-transformation. When these virtues blossom, a human being becomes a saint. These saintly qualities send a silent invitation to the Lord of Life.

Energy of Consciousness in the Human Personality.