From the conception phase, our life starts in the womb of a mother, then taking the birth and later experiencing the immense creation on what we call earth. In different stages of life, we are exposed to different atmospheres that help us to sustain our growth in life. As a result of this presence and conditions, life manifests further. Otherwise, life only withers away.

The principle is not just for us humans. It is the same even at the highest levels of Universe, Cosmos, Galaxies or at the lowest levels of a small ecosystem in a pond. A divine intelligence has moulded this nature of life with care just as how a parent would offer love and care to his/her offspring. This divine intelligence is known Adi Shakti, the first energy, from whom the entire creation manifests itself and in all the diversity.

Rishis, who are said to be spiritually evolved souls, found out that the unseen forces behind the cosmos had created life in such a manner. They found it during their deep meditation sessions and then recorded in scriptures, only to pass down as mythological stories so that everyone can understand it. This is an ongoing process. Every time someone delves into the higher intelligence, they update the existing knowledge and pass it down.

Till now, this is what we have on Devi Loka:

How Devi Loka was created

Eons of ages ago, two powerful fields – Purusha and Prakriti – emerged from Para Brahman, which then became independent. Purusha kept growing in potency and started to disturb the creation. So, Prakriti absorbed the core of Purusha. However, Purusha still continued to grow and spread all over the creation.

The core, however, started to interact with Prakriti and formed new light fields. More lights kept adding on to the existing field in the Para Brahman. Then, after further interactions and manifestation, other seven new fields were generated. Later, these seven new fields interacted with the two fields to form an integral unit, and they grew in strength. Their potency was also disturbing the creation with the instability, and so, Mula Brahman, the Primordial Intelligence, intervened and created 14 different layers in the field. To ensure the instability was not that frequent, he further divided them into 32,000 dimensions.

The total of this entirety is known as Devi Loka. According to the Rishis, the Devi Loka comprises of 9 strong energy fields, arranged in 14 layers which are divided into 32,000 dimensions.

The 9 different energy fields are:

There is 7 other pillar like structures in Cosmos, made out of special light from Para Brahman, that provides the framework for Devi Loka, along with the 9 different fields. These pillars are in the shape of elongated cones, among which four are vertically aligned and start from the borders of Para Brahman, and the remaining three are aligned horizontally.

The main function of these four vertical pillars is to sustain and hold all the energies of Devi Loka into one unit. When required, the four pillars also pass the energies to other cosmoses when required to maintain stability. To add, they also maintain other aspects of different Lokas in the Cosmos.

The two horizontal pillar manifests and radiates the quality of love throughout the Loka, and the remaining one helps Devi to perform her action, oversee the functioning, help in the activities of creation, protection, and destruction.

The shape of Devi Loka is in the form of Mahameru Chakra. It is three-dimensional structure. Many of ancient temples in India has this structure, and it is said to draw energy from the Devi Loka.

If there is the two-dimensional form of Mahameru, then it is known as Sri-Chakra. But it only connects with milder energies of Devi Loka, while the one from Mahameru chakra draws very strong energies. 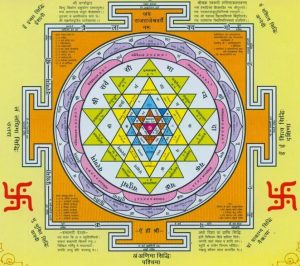 There is a Bindu in the center of Mahameru Chakra, and it surrounds by nine intersecting triangles. Then, it is surrounded by a lotus with 8 petals, then again with another lotus that has 16 petals.

The Bindu is known to be the core – the light field of Devi Loka. The nine triangles show nine different energy fields, the eight-petal shows eight special energies of Adi Shakti, which are used for further manifestations. The remaining lotus with 16 petals is the protective layer that protects the Adi Shakti.

As we already know, Adi Shakti is the first form in the creation, that is the core of Devi Loka. The form can be expressed in different other aspects, with each form representing certain characteristics. It can be said to be individual intelligence which is perceived by spiritually evolved souls. Only the first three aspects are well-known as of now as depicted in the ancient history and scriptures.

According to the Rishis, there are 10 main aspects of Devi:

The energies inside Devi Loka

There are different energies inside Devi Loka, with the primary energy made out of dark pink matter known as Vignana. All across the Devi Loka, there are two special energies: multiplying energy and creative energy. They are lighter pink in color, and with Vignana, they give out a dark pink hue to the atmosphere. 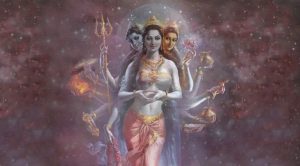 The energies are diverse, which can be represented in the color range from violet to red. The quality of each energy is different. Among them, these are the most prominent ones:

Dark Pink: The most dominant one in the cosmos. It provides a motherly aspect to Devi, as it is filled with nurturing and unconditional love.

Purple: The energy is essential to maintain the shape and to prevent the energy of the cosmos from getting dispersed. It is also a protective layer that filters energies entering and exiting the Devi Loka.

Dark Grey: It’s a special energy that was created by Adi Shakti when the entire Creation was manifested. This is required to destroy darkness and evil.

There are other Golden, lavender, lime yellow, orange colored energies with their own function that maintains the functioning of the Devi Loka.

The Life in Devi Loka

Starting from the highest levels of Mula Brahman, creation simplifies down. It might be that our life is the simplest to understand at present. The creation at higher levels are complex and are difficult to comprehend. The Rishis give us the simple account of life in Devi Loka, however.

They say that the atmosphere is made out of divine matter Vignana or Intellect matter and the cosmos radiates unconditional love. There are gems that are larger than our galaxies present in the cosmos of Devi loka and can hold further life and diversification. They also contain large amount of energies of Devi Loka. The atmosphere also has innumerable transparent particles with various characteristics. One of them has a property that affects the intuition of human system. There are other special energies that can be accessed by humans too. The Tantriks and Siddhas try to connect to the spiritual energies through their practice and gain supernatural powers. 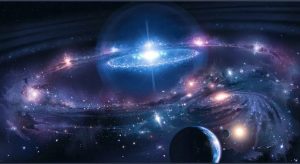 The souls are created at the core of Devi Loka and are filled with special light at the core. Rishis say that 20% of the soul in the material cosmos is from Devi Loka, and these souls have characteristics similar to that of Devi. According to them, the souls in the Devi Loka are filled with love and is connected to Devi all the time. The core might not be as diverse as our earth, but a very high form of life exists. There are no evil or negativity in Devi Loka. Souls live on casual bodies for specific reasons than to experience creation. Their role is vital in the execution of creation.

There is no knowledge about other diversification in Devi Loka as of yet. It is just known that they exist, but the details are yet unknown.

What role does Adi Shakti play in Creation

Adi Shakti has played a great role in bringing the creation into existence, with the life forms gradually evolving and developing to experience life. Other manifested universe sought her advice to bring their own level of existence. Mula Brahman has a great fondness for Adi Shakti and has helped her multiple times in the part of creation. 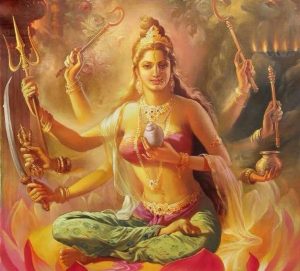 Adi Shakti executes the process of creation manifesting down from the universe to cosmoses, which later tones down to energy and matter. She is also responsible for the concept of birth and death in creation, and that the female would be the ones to give birth to the offspring. This concept is limited to this manifestation, as in other manifestations of ParaBrahma, living being’s body can regenerate and form a complete body.

In case the souls from other universe want to take birth in any of the manifestations of ParaBrahma, it has to be approved by Adi Shakti. The decision rests on her. The intellectual sheath or vignanamaya Kosha is manufactured at Devi Loka, whereby every soul which descends through Devi Loka acquires it.

Because of her love for the souls and her creation, free-will exists in all of the creation. She is also the source of art in the diversity and enrichment of life.

She has helped many Rishis in their works with her energies. The tantriks and Siddhas gain energy from her.

The further manifestation from Devi Loka

When Devi Loka came into existence, Para Brahma further manifested with the help of Mula Brahma, using the energies of Prakriti and Purusha. He wanted to test his potentials with the manifestation and with his intention to create as diverse creation as possible. This manifestation process is in the hands of Adi Shakti.

To maintain that process, she created three layers of existence: one that helped her create further, one that governed the creations, and the other that destroyed creation when required. We know them as Brahma, Vishnu, and Shiva – The Holy Trinity.

Shiva Loka – The cosmos we live in