All is One? But I See Many. Cause and Effect.

Maya depends on our knowledge of the self.

This was clarified by saying that “knowledge” refers to that which illumines knowledge of time, space and ignorance.

For example we say, “I don’t know who I am”. That conclusion is formed in the mind of the speaker. And who knows of this mind? I know.

Thus, when we say “Ishvara is knowledge”, we are referring to the very ‘I’-consciousness in whose presence, both an ignorant or knowledgeable mind is illumined.

This explanation turned the students attention to “Consciousness”.

So the aspirant asked, “If you say everything is the All-Pervading Consciousness, how do you explain the differences that we see around us? Such diversity of form, an enormous variety. Yet you say it is only of the One. Does the One shatter into many?” 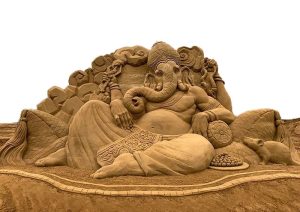 ” No, the One does not shatter into many.

Just as in a world of clay of different forms and shapes, each is only clay.

Forms are many but clay remains.

Clay without change in itself, appears as many objects.

So too does the Limitless One appear as the many, without itself undergoing change.

If we look at creation with its Infinite forms, we would think diversity is the rule.

Whereas the truth is quite the opposite.

Every object can be reduced to invisible particles.

So subtle, they are only inferences, concepts in our minds.

They are objects of a conscious subject.

Constantly changing and becoming, they are dependent-reality, without an independent existence.

What remains is ‘I’, the knower, the one subject, the only real (Atman) who is not different from Limitless-Existence-Consciousness (satchitananda).

Using examples of cause and effect, pot and clay objects, gold and golden ornaments – an effect cannot exist without its cause.

No matter how fertile our imagination, we cannot conceive of an uncaused effect.

Can a shirt exist without its material?

It cannot nor is it possible.

Cause is the only real. Rest are effects, mithya, dependent-reals.

Clay objects and golden ornaments, and other examples mentioned, require external sentience for them to be created.

Whereas the Limitless One (Brahman), cause of all effects and causes, revealing its māyā  power – appears as the many.

Without another sentient intermediary.

The One without a cause is both intelligence (nimitta-kāraṇa) and matter (upādāna-kāraṇa), maker and material.

It is One Limitless expanse all-pervading around us.

We can see its presence if we truly understand the One All-Pervading (Brahman) is same as ‘I’, the individual being, self-revealing Consciousness (Ātman).

If You Enjoy What You Do, Life Is Very Simple

What is Real and Not-Real?